75-degrees, 10 knots of wind and a glassy Pacific ocean. Sounds like a typical winter daydream in New England, but this was the report from one Friendship 40 owner who was out sailing last weekend with his wife and four kids.  Below is an excerpt from his report... which succeeded in making us very jealous. 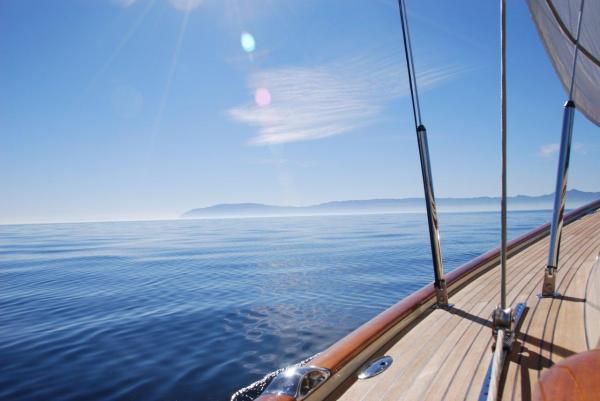 "EPIC weekend at Moonstone Cove, Catalina!  75 degrees on Jan 19th, sailed over in bathtub quiet waters with 10-12kts of wind and 6+kts of boat speed, played with a pod of dolphins and landed in our private cove to a fired up mesquite grill on shore for shishkabobs... all in the lap of luxury of the prettiest sailing machine ever designed and built! After dinner, all 6 of us watched a family movie in the prettiest unintended movie theater ever designed. 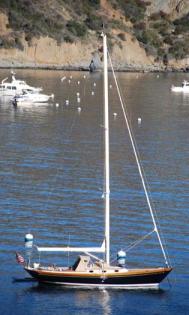 Woke up and hiked 2,500 ft to the top of a mountain above the blue water of Moonstone Cove with 100 mile visibility, then back to the boat for time on the toys (dingy, kayak and a new cool blow up stand up paddle board).

Then time for lunch on board with 'shrimp on the barbie' (and the first time we've ever had a chance to use our extra large Magma...what a barbie...seriously, so convenient and well done)!   Now it's dinnertime and we're listening and dancing to great tunes (lots of little booty shaking!) and we're the only boat in the cove getting ready to go to

shore for another family dinner.

Now, before we went to shore, you will be most pleased to know that one of my sons commandeered my computer (we have great wireless in the cove) and demanded to see the new Fontaine Surfari and to study "his" ultimate boat (the Friendship 65'....you will be proud to know that he knows all the stats and has memorized the layout!).  I agreed with him except for my personal favorite "Whisper."  So you will pleased to know

else who has sense enough to enjoy the beauty of the timeless design and performance of a Friendship 'Steinway on the water.'

As my wife said while on the hike today: 'if we had waited even 6 months there would have been too many reasons not to have built our Friendship and we never would have had experienced some of the greatest family memories ever' (including those prompted by Miss Jenni to go to NZ!).   So with all this good karma coming from the left coast, we're sending our best and hoping the best for you and your success in 2013."