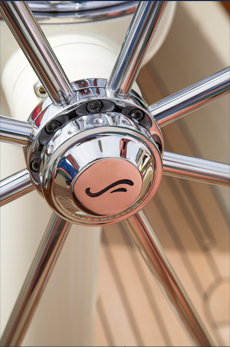 The design of the rig has a direct impact on the performance of the Friendship 40 as the sails provide the “horsepower” to move the hull through the water. In the absence of any racing rules, the Fontaine Design Group advocates a tall, efficient, high-aspect sail plan that can be supported by a hull and ballast plan that provides a respectable righting moment.

In addition to minimizing wetted surface, we maximize sail area so that the ratio of sail area to wetted surface is extremely high - another key factor in determining light air performance. Under the old racing rules, a genoa of up to 150% overlap was allowed without penalty. Somehow, the idea was adopted that large genoas were also good for cruising sailors. In reality, reducing a genoa size to 110% has little effect on performance because the forward one-third of the sail is providing the drive. A 110% genoa with a higher clew improves visibility for the helmsman and is easier to furl because the genoa car does not move as far forward when reefing.

Rig design can have a great impact on the perception of stability. For example, a yacht with a relatively poor righting moment could be hopelessly under-rigged for lighter winds, yet feel “stiff” in a breeze simply because there is not much there to heel the boat. We advocate a relatively powerful sail plan for all winds, supported by a stable hull that can be easily reefed as the wind increases.