How Big Can You Make a Boat Lift?

HOW BIG CAN YOU MAKE A BOAT LIFT? 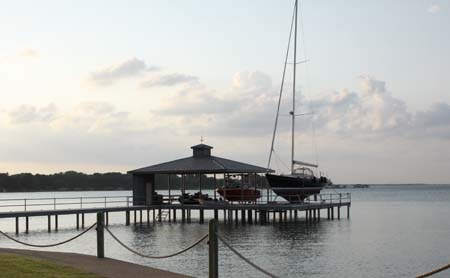 In my initial log entry I wrote of the many different travel destinations that my job has required. These trips have taken me as far away as our builder’s yard in Whangarei, New Zealand to the opposite end of the globe in Hindeloopen, Netherlands. Unique places for sure… usually remote, always beautiful.

Perhaps the most interesting location my role as commissioning agent (among other things) for the Friendship Yacht Company has sent me was to Streetman, Texas. I remember saying… “Excuse me, did you say Streetman, Texas?”

Thank you, Google Maps! As I typed in and found the one Streetman on the Texas map, I also noticed that it was 200 miles from the nearest salt water. However, right above Streetman is a large man-made lake called the Richland Chambers Reservoir - the unlikely yet soon to be new home for a beautiful sailing yacht.

Peaceful, quiet and hot is what I found out there on Richland Chambers Reservoir. I also found a very excited owner standing by his newly launched 40. I missed the launch but was surprised to learn there was no boat yard, no travel lift, nothing - just a grassy field, an abandoned off-season  campground with a small floating dock and a rigging crew from the Galveston area setting up the rig.

One thing that I learned about Texans: you do not want to be between where they are and where they intend to go. With a steady and quiet confidence, the crew from Galveston launched a relatively large boat where there were no facilities. They rigged and quietly stepped the mast from a grassy field. There was no one in sight but the riggers, the crane operator, the owner and me. It would certainly be an honest statement to say that the crane operator had never seen a mast, never mind lifted a 40’ sailboat before. But there she was, after a half a day of work, floating peacefully in the middle of a reservoir… a shiny Friendship 40 waiting for her proud new owner to take her home.

The next morning the new owner and his wife joined me for the initial voyage. We cast off the lines and, skirting a few dead headed trees, made our way out to open waters. Setting sail in a gentle 10 kt breeze, sliding along at just over 7 knots in perfectly flat water… now I get it! There was nothing but green rolling hills, flat water, a steady, gentle breeze and a few very surprised bass fishermen in their small lake boats to break up the comfortable spell we were under.

As nice as the sailing was that day, I had to ask – how did the owner ever envision a yacht this large on this lake?  Well, having searched for the perfect boat for many years, he discovered the Friendship 40 and decided that this was the boat for him. (click here to see currently available brokerage Friendship 40’s) Despite the logistical issues of getting a boat this size into his lake, there was also the somewhat major issue of where to keep it. The lake is large enough to cover its length in about an hour’s time, always in a fresh breeze and flat water. But there are no boat yards, no marinas, no support at all. But recall what I said earlier about a Texan... there are no such things as insurmountable obstacles.  The Friendship 40 was the boat he wanted, so if it had to be treated as all the other lake boats, then so be it! 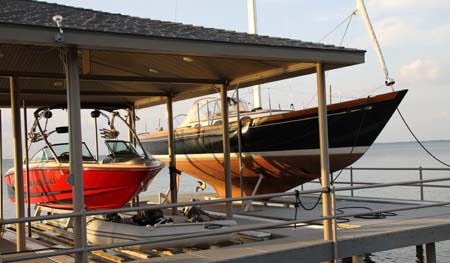 Having seen lifting ramps in Florida and in California and been impressed with the ability to dry sail a boat, I have never seen one as large or as cleverly engineered as what was built for this Friendship 40. This “boat house” is sitting just steps away from the owner’s newly built home… his personal reward for retirement. It is an awesome sight to see someone with a goal go after it and make it happen, no matter how absurd it may seem in the beginning.  I have a great respect for this owner and for the people who helped his dreams come true.  Happy retirement Steve!

Have you ever seen a yacht in another curious place?  Post your comments!